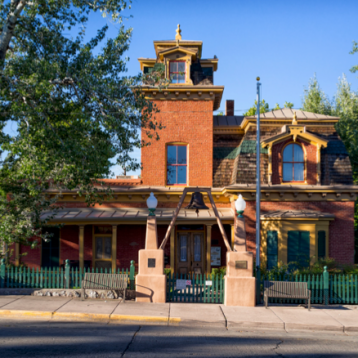 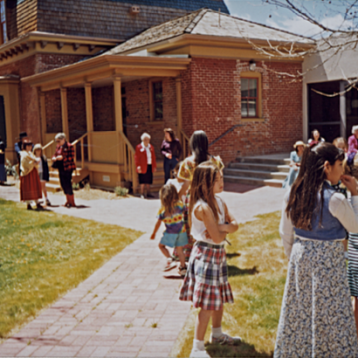 Participants at a “Kids and Toys Tea Party” in the Museum courtyard, early 1990s (Photo courtesy of the Silver City Museum). 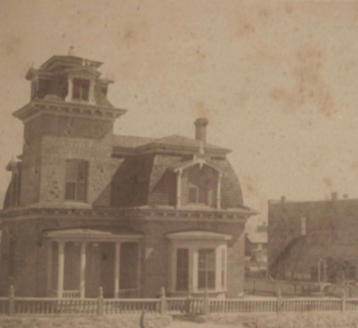 The Ailman (left) and Meredith houses on Broadway, Silver City, soon after their construction in 1881. In 1905 the Meredith house was disassembled and reconstructed a few blocks away on Cooper Street; it was remodeled beyond recognition in the early 1940s. (Photo from H. B. Ailman’s scrapbook, image #07724, Silver City Museum)

Built in 1881 as the home of H. B. and Theora Ailman and family, the Ailman House is one of Silver City’s most distinctive and emblematic buildings from the early mining boom era. It has successfully adapted to a series of changing uses, serving the community in a public capacity for nearly a century. In many ways its story is the story of Silver City.

The Mansard/Italianate Ailman House originally stood next to an identical twin home built for Ailman’s mining partner H. M. Meredith and his family. Early Silver City contractor Robert Black adapted his plan for the houses from a design in A. J. Bicknell’s Detail, Cottage and Constructive Architecture, an 1873 builders guide. The twin houses were a tangible expression of the partners’ success after years of toil in their silver mine at nearby Georgetown. Ailman and Meredith also remodeled and expanded a large commercial building, where they opened a mercantile store and bank. Both men were leading members of the community, and Theora Ailman held establish the local hospital.

The Meredith & Ailman Bank failed in 1887, and each of the families eventually left the area. Daniel C. and Theodora Hobart acquired the Ailman house in 1892 and made a number of improvements over the next 16 years, including a 1900 addition. While examining the house for a Historic Structure Report in 1993, architect Steven Kells discovered modifications to the entry, staircase, and stairwell that likely dated from the time of this addition. Kells’ research suggests that the front entry staircase may have been salvaged from the Tremont House, a hotel owned by the Hobarts. Located on Silver City’s flood-prone Main Street, the two-story hotel was demolished in 1899 due to flood damage.

A new era for Silver City began at the turn of the 20th century, as silver mining gave way to an economy based on health. The region’s salubrious climate was widely marketed to tuberculosis sufferers, who arrived in droves to “chase the cure.” As the older children in the Hobart household moved on, the family began to rent out rooms. The Hobarts are known to have lodged and cared for at least two young healthseekers in the early 1900s. Mrs. J. R. Johnson bought the house in 1908 and opened a boarding establishment, “where many a home-sick lonely healthseeker newly arrived in the strange town with its strange surroundings found in her ready sympathy and quick understanding, solace for their only too pungent grief and loneliness.”1 Other landladies followed over the ensuing years.

The Town of Silver City bought the former Ailman property in 1926, along with the adjacent lot where the Meredith house once stood (it was disassembled and reconstructed elsewhere in 1905). “The cost of making the building suitable for use as a city hall will be very moderate and the remainder of the lot can be utilized for the storage of city property,” a local newspaper reported.2 Oak flooring in the downstairs rooms and transoms above interior doorways were probably installed in the relatively brief City Hall period.

In 1931 the Town acquired a larger building to use for municipal offices, opening up the Ailman House for a new role as fire station. It offered living quarters for the fire chief and family, with dormitory and recreation rooms for the volunteer firefighters. Silver City’s mayor announced that the grounds would be “beautified as much as possible” and might “develop eventually into a park and civic center.”3 A brick garage, attached to the north end of the Hobart addition in 1932, was equipped with automatic fire doors activated by pulling a rope. Another large garage was later added to accommodate the Town’s mechanic shop.

The property’s civic importance increased with the installation of a WWII honor roll—a row of plywood tablets set in rustic frames, painted with the names of local men in the service—in front of the Ailman House. Hundreds of area residents attended the 1942 dedication ceremony, where the tablets were unveiled by children of 200th Coast Artillery members captured in the Philippines. The fire chief’s wife was tasked with painting a color- coded star next to the names of soldiers reported missing, injured, or killed. The honor roll became a de facto status report viewed daily by community members throughout the war.

Over nearly four decades in the Ailman House, the Silver City Fire Department gradually transformed from a mostly volunteer crew into a trained professional unit. The need for a more modern facility became evident. In 1966 the Mountain States Inspection Bureau informed the Town that it must find a more central location for its fire station or lose funding. “We have no choice,” the mayor stated.4 Coincidentally, townspeople were trying to organize a local museum at that time. With plans for a new fire station underway, the Town Council granted the use of a few rooms in the Ailman House for museum displays. The Silver City Museum opened on the Fourth of July in 1967, but it would share space with the firemen for another three years until the new Public Safety Building was completed.

The Museum has now occupied the Ailman House for more than 50 years and has welcomed tens of thousands of visitors from all over the world. It is the scene of events like the 4th of July Ice Cream Social that have themselves become local traditions. The venerable structure could be considered the Museum’s largest artifact, one experienced from the inside out. It has had multiple phases of historic rehabilitation, including a major expansion and improvement project designed by New Mexico architect Harvey Hoshour. Individually listed on the state and national registers, the Ailman House is a fitting vessel in which to preserve, share, and discuss the objects and stories from Silver City’s continually evolving history. I believe this is a building that has truly brought—and continues to bring—its community together in a lasting and meaningful way.