John Gaw Meem was a “BMOC”: a busy man on campus. There are many examples of Meem’s architectural designs on the campus of the University of New Mexico including the acclaimed Zimmerman Library. He largely promoted, some might say invented, the Pueblo Revival style of architecture common in the Southwest. Tucked away on the UNM Campus, almost unnoticed, is one of his structures: the UNM North Golf Course Lightning Shelter. 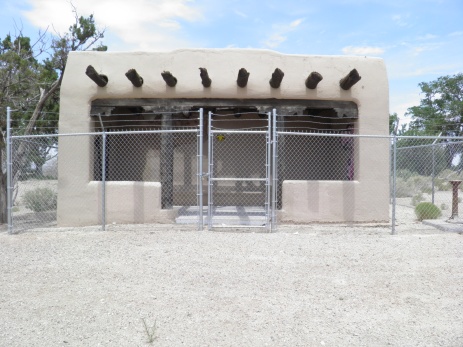 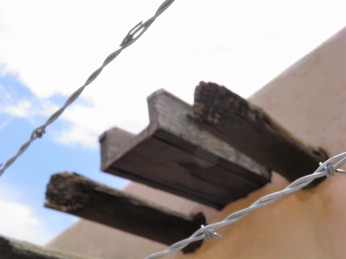 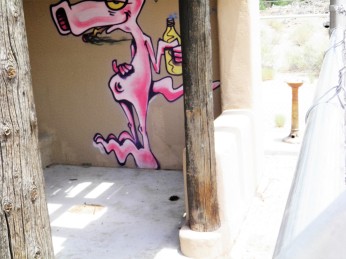 Perched on a hillside, with an expansive view across the valley toward the three western volcanoes, sits this odd, tiny building. At first glance it looks like a bus-stop shelter dropped out of the sky that landed in the wrong place. Exposed as it is, the structure was initially intended to be a lightning shelter for golfers on the UNM North Golf Course. The course opened in 1942 so the building dates from that period. When it was built the view to the western horizon must have been impressive and even today it would have a great view of Albuquerque’s sunsets. It has always been open to the weather with a bench seat or banco across the rear wall. With a blustery storm the huddled golfers would still have gotten a little wet but would have avoided a lightning strike. It was a place of refuge in that sense.

Now it sits unused and surrounded by a high chain-link fence and barbed wire. It is in bad shape. The University has selected the surrounding area as a dump for broken concrete and demolition waste as well as bulldozed trees and brush.  Demolition by neglect looks to be the eventual outcome for the structure unless something is done to save it.

A closer look reveals how far it has deteriorated…

The eight supporting vigas are seriously degraded in the front and rear of the building. There is a single deteriorating canale rain spout on the rear of the building that served to carry water off of the now missing roof. The actual exterior surface of the building has seen some maintenance and repair but the surface is peeling off on the north side..

The building sits on a slab. There is some exposure and deterioration as well as at least one furry resident living under the structure.

The interior is in even worse condition. 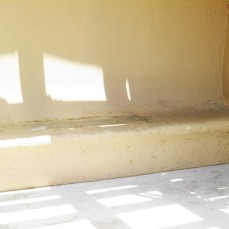 Whatever existed as the original latillas and roofing material is mostly gone. The adobe  is exposed to the rain and weather in the rear interior wall of the building. Unprotected, it won’t take long for that to collapse. Visitors have decorated the walls with murals, indicating the structure’s more recent usage.

There are a few positives. The front lintel beam, the corbels, and the two supporting columns are intact and possibly salvageable. They are seriously weathered but seem to be stable and serving their purpose. The column corbels have suffered the most through the years but could be repaired.

It’s hard to say what the future holds. If it is left in its present state the building will not survive for long…but positive things are happening. The legislature has appropriated funds for parts of the project. Maybe in a couple of years this will all be different. In the meantime, it might be a good idea to move quickly to stabilize the structure with a temporary roof so the interior exposed adobe wall can be saved.

There are community efforts to develop a master plan for the entire UNM North Golf Course, including the Lightning Shelter, as open space with trails, benches and landscaping. The effort, spearheaded by Bernalillo County with the support of the North Campus Neighborhood Association, is moving forward with public meetings with professional landscape architects and planners.

WHAT CAN YOU DO TO HELP?  ATTEND AN UPCOMING PUBLIC MEETING:
(Subject to change. Times and locations to be announced.) 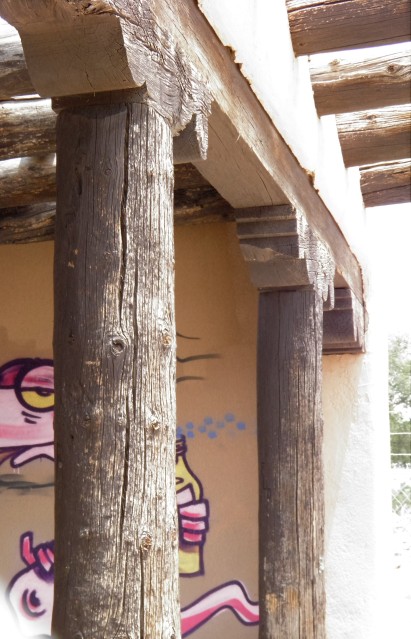 One thought on “Coming Out of the Rough”