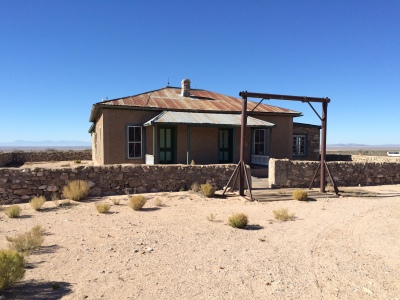 Not so long ago, all rural houses in New Mexico were “off the grid.” In the case of the historic Schmidt-McDonald ranch house in Socorro County, a wind-powered electrical system was installed before rural electrification came to the US on a large scale during the 1930s. Built by the German-immigrant Franz Schmidt family in 1913, the house later became home to the George McDonald family, who in 1942 leased it to the federal government for the Manhattan Project. They and about 70 other ranching families yielded their land, which was later purchased for what we now know as White Sands Missile Range.

The house is undistinguished architecturally — a hipped cottage of stuccoed adobe with additions built of stone, all neatly trimmed in wood and topped with metal. Served by an underground cistern and above-ground water tanks, it stands just two miles from the point of the Trinity explosion of July 16, 1945, the first test of an atomic weapon. Therein lies the house’s historic significance, because Manhattan Project personnel assembled the plutonium core of the weapon in a bedroom.

The house withstood the Trinity explosion and was restored in 1984. It retains many features from the Schmidt and McDonald years, including a front porch and, in the parlor, a frieze of stencil-painted decoration. It also retains Manhattan Project remnants such as an overhead, iron pipe frame at the front gate. The ranchers’ stone-walled water tanks remain as well—they made for cooling dips by Manhattan Project personnel in the summer heat of the storied Jornada del Muerto.

Trinity Site is a 50,000-acre National Historic Landmark within the 3,200-square-mile White Sands Missile Range. It is open to visitors on the first Saturdays of April and October under auspices of the US Army.