It has stood forlorn and mostly empty alongside the railroad tracks in Las Vegas for decades – a throwback to when train travel opened up Southwest tourism. Now the Castañeda Hotel, done in Mission Revival style as the first gem of the Harvey House chain, is ready for a makeover.

Allan Affeldt will try to repeat in Las Vegas what he did in the 1990s when he and his wife helped save the then-decrepit La Posada hotel in Winslow, Ariz. That was another of the Harvey House gems that dotted New Mexico, Arizona and California to serve train travelers. In New Mexico, in addition to La Castañeda, Fred Harvey hotels included La Fonda in Santa Fe and the no longer existing Alvarado in Albuquerque.

Affeldt said the hotel’s rooms will be enlarged and since most did not have individual bathrooms, those will be added. The old Castañeda had 40 some rooms while the new one, some version of which could be open in 2015, will have about 25.

Follow the Castañeda Hotel on Facebook to learn more about the hotel’s progress and to see photos from the project.

Hosing down the brick walkway 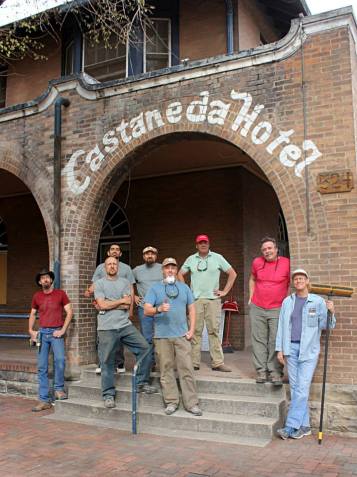 A few members of the demolition/cleaning crew at the end of a long day.

Allan with Dave Herzberg, who has been collecting restoration video at La Posada for over a decade.

Up in the bell tower

3 thoughts on “The Castañeda Hotel, the first of the Harvey House hotels, is ready for a makeover”